Trail bike sales and registrations are at an all-time high. Trail bikes are the largest category of motorcycle sales in Australia. This points to a growing number of West Australians taking up recreational off road riding as a pastime.  In fact 50% of all quads in Australia, are sold in WA.

Western Australia is blessed with some truly spectacular riding opportunities within practical distance from Perth, particularly in the South West region of the state where terrain, scenery and climate combine to create a world class riding environment.

Unfortunately, trail bike riding is often in conflict with other recreational land use considerations such as mountain bike riding and bushwalking, as well as general land conservation and – increasingly – water conservation. As the number of trail bike riders increases it can be expected that these conflicts will increase.

Logically, some separation of land use is required in order to cater for the various legitimate land use interests. We live in a very large state with very large forest areas. It shouldn’t be a problem.

DBCA, the state government instrumentality responsible for managing public land assets, has already demonstrated the capacity to cater for the needs of certain groups of recreational land users. The Bibbulman Track is a world class 963km trail, maintained for the benefit of bush walkers. Similarly the Munda Biddi Trail will eventually extend 1,000km from Mundaring to Albany to cater for touring mountain bike riders.  The Munda Biddi Trail alone recently received $3million of government funding to finish the trail.

Residential developments are replacing many of the outlying areas where trail bike riding occurred. In 1978 there were eight designated Off Road Vehicle areas in the Perth metropolitan region. In 2008, despite the very significant growth in trail bike numbers, only three areas remain and the two largest of those have been reduced in size over the years.

Compounding this shortage is the fact that none of the proclaimed Off Road Vehicle Areas have been effectively planned or developed, receive no maintenance, have no facilities, and do not provide a satisfying experience for riders.

Our greatest challenge is to overcome the negative image and negative attitudes that the community has for trail bikes and some riders.  The main community concerns are:

The Recreational Trail Bike Riders’ Association has been formed to address this problem. With an activity moving rapidly to crisis point we can no longer afford anything less than an industry-wide, properly coordinated, properly resourced advocacy campaign to ensure that the trail bike riding community is recognised to hold legitimate usage rights to public land that are no less valid than those of bushwalkers, mountain bike riders and other recreational users.

We can then leverage this change in attitude to develop appropriate land management and regulatory strategies in association with land custodians and other stakeholder agencies. 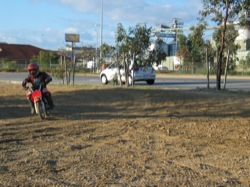