In 2005 a group called WATARC (the WA Trailriders Access Rights Coalition) was formed to work behind the scenes to raise the profile of recreational trail bike riding, collate research information and contribute to various government studies.

Until recently, land management issues papers contained no evidence of any input from trail bike rider interest group – suggesting that the case for trail bike rider access had not been effectively communicated, despite the existence of several well meaning stakeholder groups.

The WA Trailriders Access Rights Coalition (WATARC) was formed to address this problem and subsequently the decision was taken to incorporate WATARC into a broader representative association so that we can better quantify and demonstrate the demand for facilities. And so was born the Recreational Trailbike Riders’ Association of WA.

But with a sport moving rapidly to crisis point we can no longer afford anything less than an industry-wide, properly coordinated, properly resourced advocacy campaign to ensure that the trail bike riding community is recognised to hold legitimate usage rights to public land that are no less valid than those of bushwalkers, mountain bike riders and other recreational users. 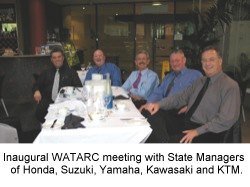